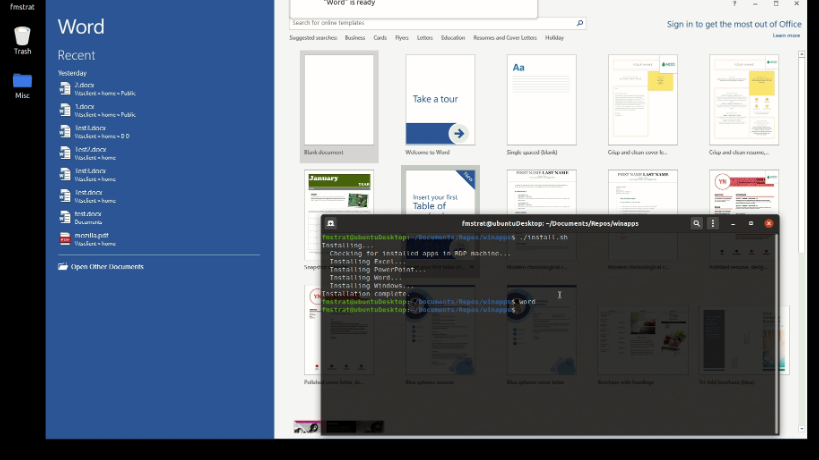 Run Windows apps such as Microsoft Office/Adobe in Linux

Run Windows apps such as Microsoft Office/Adobe in Linux (Ubuntu/Fedora) and GNOME/KDE as if they were a part of the native OS, including Nautilus integration for right clicking on files of specific mime types to open them.

WinApps was created as an easy, one command way to include apps running inside a VM (or on any RDP server) directly into GNOME as if they were native applications. WinApps works by:

WinApps supports ANY installed application on your system.

It does this by:

Any officially configured applications will have support for high-resolution icons and mime types for automatically detecting what files can be opened by each application. Any other detected executable files will leverage the icons pulled from the EXE.

To get things going, use:

You will need to create a ~/.config/winapps/winapps.conf configuration file with the following information in it:

The username and password should be a full user account and password, such as the one created when setting up Windows or a domain user. It cannot be a user/PIN combination as those are not valid for RDP access.

Step 3: Setting up your Windows VM

You can refer to the KVM documentation for specifics, but the first thing you need to do is set up a Virtual Machine running Windows 10 Professional (or any version that supports RDP). First, clone WinApps and install KVM and FreeRDP:

Now set up KVM to run as your user instead of root and allow it through AppArmor (for Ubuntu 20.04 and above):

You will likely need to reboot to ensure your current shell is added to the group.

Next, define a VM called RDPWindows from the sample XML file with:

To increase performance of the VM and decrease resource utilization, read the Improving Performance section.

You will now want to change any settings on the VM and install Windows and whatever programs you would like, such as Microsoft Office. If the definition fails, you can always manually create a VM. You can access VMs with:

Option 2 - I already have an RDP server or VM

If you already have an RDP server or VM, using WinApps is very straight forward. Simply skip to step 4!

After the install process, or on your current RDP server, you will want to complete the following steps. These steps should be completed regardless of whether you use a KVM based VM, another virtualization software, or a remote RDP server.

Step 5: Connect GNOME/KDE to your Windows VM with shortcuts and file associations

Lastly, check that FreeRDP can connect with:

You will see output from FreeRDP, as well as potentially have to accept the initial certificate. After that, a Windows Explorer window should pop up. You can close this window and press Ctrl-C to cancel out of FreeRDP.

If this step fails, try restarting the VM, or your problem could be related to:

Then the final step is to run the installer which will prompt you for a system or user install:

This will take you through the following process:

Adding applications to the installer is easy. Simply copy one of the application configurations in the apps folder, and:

When running the installer, it will check for if any configured apps are installed, and if they are it will create the appropriate shortcuts on the host OS.

WinApps offers a manual mode for running applications that are not configured. This is completed with the manual flag. Executables that are in the path do not require full path definition.

The installer can be run multiple times, so simply run the below again and it will remove any current installations and update for the latest applications.

The following optional commands can be used to manage your application configurations without prompts:

In KVM, the CPU timing is not optimized by default. Use virsh edit RDPWindows to edit the VM and change:

How To Use Windows Calculator App On Ubuntu

Microsoft is no longer an enemy of the Linux or Open Source communities. Believe it or not, the Windows-maker is an ally these days.

How to set up automatic security updates for Ubuntu

The Linux server security is indeed an essential task for sysadmins. One of the most fundamental ways to keep the server secure is by installing security updates on time to patch vulnerabilities.